The Egypt Centre is Wales’ only dedicated Museum of Egyptian Antiquities, attracting over 20,000 visitors annually. We use our collection of almost 6,000 objects to inspire learning for all and widen participation within and outside the Museum.

We rely heavily on educational visits, shop sales, events, and donations as our main source of income. However, since the COVID-19 pandemic, the Museum has had to close for the foreseeable future, thus greatly affecting this income.

We previously organised a successful series of free Zoom lectures,and while some lectures we organise will remain free, this new Egypt Centre Fundraising Lecture Series will allow us to generate income for the Museum. Proceeds from the ticket sales will go direct to the Egypt Centre, and will help us to continue operating during these difficult times.

Thank you for your support! 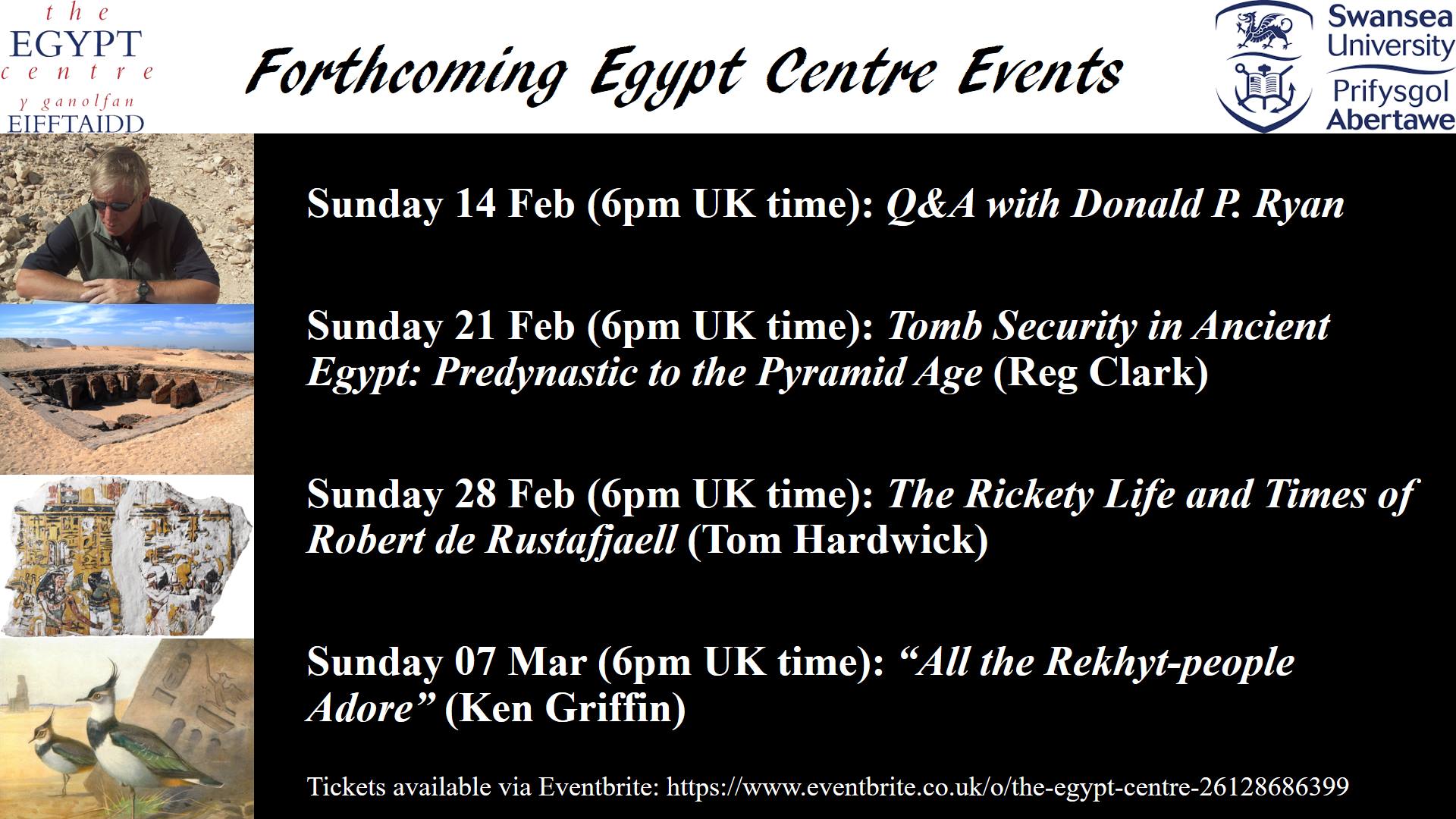 Dr. Donald P. Ryan is an archaeologist and Faculty Fellow in the Division of Humanities at Pacific Lutheran University in Tacoma, Washington, USA. He is the director of the PLU Valley of the Kings Project, a site he has excavated for over thirty years, and is the author of several books and numerous scientific and popular articles on archaeological subjects.

This event is a Q&A session with Dr. Donald P. Ryan, which will focus largely on his excavations within the Valley of the Kings. The event is organised to coincide with the conclusion of the Egypt Centre’s short course on the Valley, with the Q&A being open to a wider audience. Topics to be discussed include, but are not limited to: The Valley of the Kings; Howard Carter; Giovanni Belzoni; the alleged mummy of Hatshepsut from KV 60; the Face of Tutankhamun (documentary); Thor Heyerdahl.

Tomb security in Ancient Egypt: Predynastic to the Pyramid Age – by Reg Clark

Most scholarly Egyptological discussions of tomb security in ancient Egypt tend to be brief and usually included only as part of a larger work; the topic usually relegated to the subject of lurid speculation and fantasy in novels, the popular press and cinema. In this lecture, which is based on my doctoral research, I trace some of the main developments in the architecture and security of royal and private tombs from the Predynastic Period up until the early Fourth Dynasty. Within that framework, I then go on to consider whether many of the familiar architectural elements that are found in Egyptian tombs were in fact the result of the need to protect the tomb, rather than the consequence of monumental or religious considerations.

The late nineteenth and early twentieth centuries are popularly called the “Golden Age” of Egyptology – a term which begs a lot of questions. Golden for whom? And how? Large-scale excavations in Egypt, both official and unofficial, enriched museum and private collections outside Egypt, and scientific and popular publications brought Pharaonic Egypt to ever more interested and informed audiences. Robert de Rustafjaell is one of the strangest and most mysterious figures of this period – a bigamist, a serial absconder and man of many aliases, an amasser of valuable and worthless objects including the oldest paintings in the world on canvas and a relic of the true cross, a Zelig-like figure who turns up in the oddest places – and one whose Egyptian collections enriched the Egypt Centre Swansea. This lecture will provide an outline of Robert de Rustafjaell’s life, attempting to disentangle truth from fiction, and to set de Rustafjaell in the context of his times.

“All the rekhyt-people adore” – by Ken Griffin

Egyptian society is often said to have been divided into social classes, with the pat-people representing the ‘elite’ and the rekhyt-people being the ‘commoners’. Yet an examination of the Egyptian texts reveal that the rekhyt-people are commonly described as performing actions, emotions, and gestures for the benefit of the divine pharaoh and the gods. This lecture will examine when and where these actions were performed, and for whom. Additionally, the use and function of the rekhyt rebus will be analysed in detail. While this motif has previously been identified as an indicator of accessibility, an examination of the distribution of the rebus reveals that it is more often located in areas that were inaccessible to the rekhyt-people. It is concluded instead that the rebus represented the metaphysical presence of the rekhyt-people performing their actions of maintenance, actions that not only guaranteed their own survival but also that of the entire cosmos.

Music in ancient Egypt and its beginnings – by Heidi Köpp-Junk

In the Old Kingdom, a great number of textual and iconographic documents refer to music and musicians, and even a complex hierarchy of musicians. Music was not only an entertaining factor, but played a major role in ritual context, be it in temples or tombs, and at the royal court.

But the earliest evidence for music in Egypt is much older and dates back to the Fifth Millennium BC. The lecture, showing the current research results of ancient Egyptian music archaeology, deals with the origins in Neolithic, Predynastic, and Early Dynastic Times that allowed the development of the complex system as attested in the Old kingdom.

Moreover, the musical instruments attested in Ancient Egypt per se will be presented: Heidi Köpp-Junk shows 5000 years of ancient Egyptian music history with over twenty-five instruments (replicas of ancient Egyptian instruments and modern equivalents), including the so-called dancer’s lute from the time of Thutmosis III (ca. 1400 BC) as well as song texts such as the Song of the palanquin bearers, the Harper’s song, or the love song “Travel to Memphis”.