Egypt and Its Neighbours

Did you know, we don’t just have items 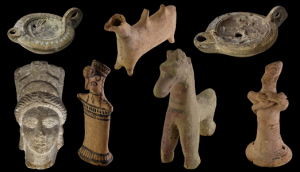 Colonialism on the part of many European individuals and institutions resulted in the formation of many of the major collections we have today.

We also have objects from:

The Egypt Centre, together with other Swansea University staff, led by Dr Ersin Hussein, is involved in a project called Egypt and its Neighbours. You can find out more here.

We are presently (July 2021) producing a display case on Egypt and its Neighbours. This will be launched in  September as part of a conference celebrating the arrival of the Wellcome Collection in Swansea fifty years ago.

Several objects in the Egypt Centre show the links between Egypt and the rest of the world in a particularly visible way. For example:

This glass head pendant was of a type distributed by the Phoenicians. It is possible that this one was made for the Egyptian market.

These brazier fragments were made throughout the Hellenistic world, though there are hints that ours were made in Egypt.